Yet there was Obama this week, sarcastically calling McCain’s chief economic adviser, former Sen. Phil Gramm, “Dr. Phil” – a reference to the touchy-feely television psychologist Phil McGraw – for saying that recent economic woes were based on a negative national mind-set.

“He’s ‘Dr. No,”’ McCain shot back, using his new pet name for Obama – based on a villain in the 1962 James Bond movie – because of his opposition to various proposals from McCain.

Every presidential election year, the nominees of the major parties vow to run cordial campaigns, only to behave otherwise when the battle finally joins.

This campaign, though, had held out more promise than most previous election cycles to be something different, with two candidates whose pledges to change “politics as usual” have been central to their political identities.

Obama has inveighed against “all the petty bickering and point-scoring in Washington”; McCain, whose bus and plane are streaked with the words “Straight Talk,” has talked about running “a respectful campaign,” what he has called “an argument among friends.”

At play, beyond real policy differences over major issues like taxes and Iraq, is a fierce competition to win the moment in a hyper-charged news environment driven not only by cable and the evening newscasts but also by the scores of Web sites that now cover politics by the minute with screaming headlines attached to the smallest developments.

The tone of the discourse seems to carry risks for two men who in part became their parties’ presumptive nominees by speaking against partisan bickering, said Matthew Dowd, a former strategist for President Bush.

“The reason why each of these candidates won was for the exact opposite reason from how they’ve been acting lately,” Dowd said. “They need to say to themselves, ‘Listen, what made me special, what made it work for me, was this, and I’m going to have to have a disciplined approach that matches my rhetoric.' ”

For their part, the campaigns blame each other for setting a combative tone that makes turning down the volume the equivalent of unilateral disarmament.

Behind the scenes are amped-up campaign war rooms that between them send dozens of attack e-mail messages to reporters on a given day. The force behind some of the harder-charging rhetoric may be no different than what prompted allies of John Quincy Adams to run searing attack pamphlets against Andrew Jackson in the 1820s: It works.

“As long as it continues to work,” said William D. Harpine, the chairman of the department of communications at the University of South Carolina, Aiken, “there will be some temptation by even the most high-minded candidates to engage in unfair, negative campaigning.”

The early talk of an unusually dignified campaign year had caused worry at places like FactCheck.org, a group devoted to highlighting false and misleading campaign statements under the auspices of the Annenberg Public Policy Center of the University of Pennsylvania.

“If the dialogue becomes too elevated, I’ll have to retire,” said Brooks Jackson, the FactCheck.org director. “So far, no danger there.”

The group has had a particularly busy couple of weeks, with McCain’s campaign and the Republican Party providing much of the fodder recently.

There was the party-sponsored television advertisement and a McCain-sponsored Web video that said Obama was opposed to “innovation” on energy policy, the development of electric cars and nuclear power. (Obama has proposed a $150 billion investment in the accelerated development of alternative energy sources, including hybrid-electric car engines, and does not oppose nuclear energy.)

There was a McCain campaign claim that Obama voted 94 times “for higher taxes” (the tally includes nearly two dozen instances in which Obama simply did not go along with proposed cuts by Republicans), and a McCain and Republican Party radio advertisement that said Obama supported raising taxes on people who made as little as $32,000. The bill in question was a nonbinding budget resolution that did not propose raising taxes on anybody who made less than $41,500.

Obama’s campaign began running a response radio ad on Friday citing the critique by FactCheck.org of that accusation, with one character equating the Republican claim with the tactics of Bush’s former strategist Karl Rove.

Obama and the Democratic Party have also taken their lumps for misstating McCain’s positions. Obama said in June that McCain’s campaign was “fueled by contributions from Washington lobbyists and special interest PACs”; such donations accounted for a small percentage of McCain’s campaign money, according to the Center for Responsive Politics.

On Thursday, Obama said McCain believed the economy had made “great progress.” He was quoting from an interview McCain gave to Bloomberg Television last spring in which he referred to job creation under Bush but added that it was “no comfort to families now that are facing these tremendous economic challenges.”

The Obama campaign and the Democratic National Committee also sought this week to portray McCain as being against the Social Security system for saying “it’s an absolute disgrace” that “we are paying present-day retirees with the taxes paid by young workers.” The Democratic Party held a news conference to criticize McCain’s “statement that Social Security is an ‘absolute disgrace.”’ (McCain’s aides said he had been trying to describe projected shortfalls that could leave the system depleted when younger workers retire.)

Each side said it could support its accusations with facts and blamed its opponent for breaking vows to raise the level of discourse.

“It’s clear that Sen. McCain and his campaign treat straight talk like a slogan and not as a standard they adhere to,” said Tommy Vietor, a spokesman for Obama.

Tucker Bounds, a spokesman for McCain, said: “Barack Obama has shown he’s the type of politician who will advance himself before he advances the debate or the issues. Let’s drop the pretense that he stands for a new type of politics.”

Bounds said McCain had nonetheless made “a very serious and genuine effort to raise the debate,” with his offer to hold a series of 10 town-hall-style debates before the conventions. 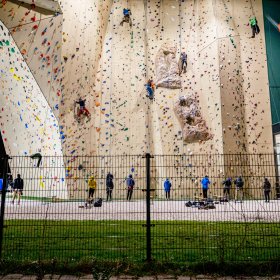